Because there is no big news yet, some short updates.

– Claude Schwarz pointed me to the Yahoo user group “Lecroy Owners group”, they have design files for a HHZ406 replacement. (Made by Dieter Frieauff). So maybe the ext. trigger input can be repaired as well.

– A service manual for this ‘scope (And others) can be found there as well, or alternatively here: http://www.ko4bb.com/manuals/index.php?dir=LeCroy (Or on elektrotanya.com – but that site is full of ads)

– NoTMS was caused by a missing “Vct”, I accidentally scratched trough this trace while placing the bottom cover. Took quite some time to find, then just a little wire to fix. 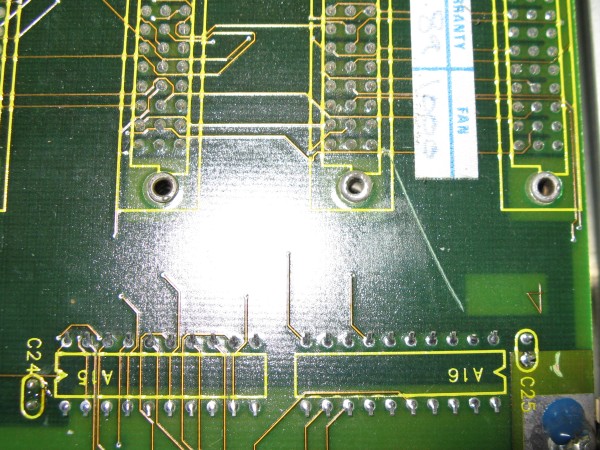 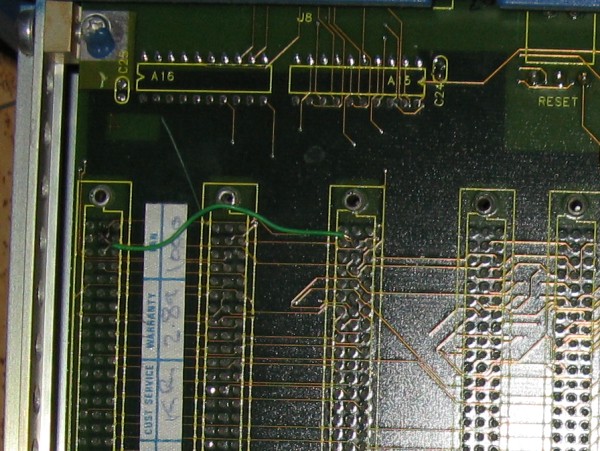 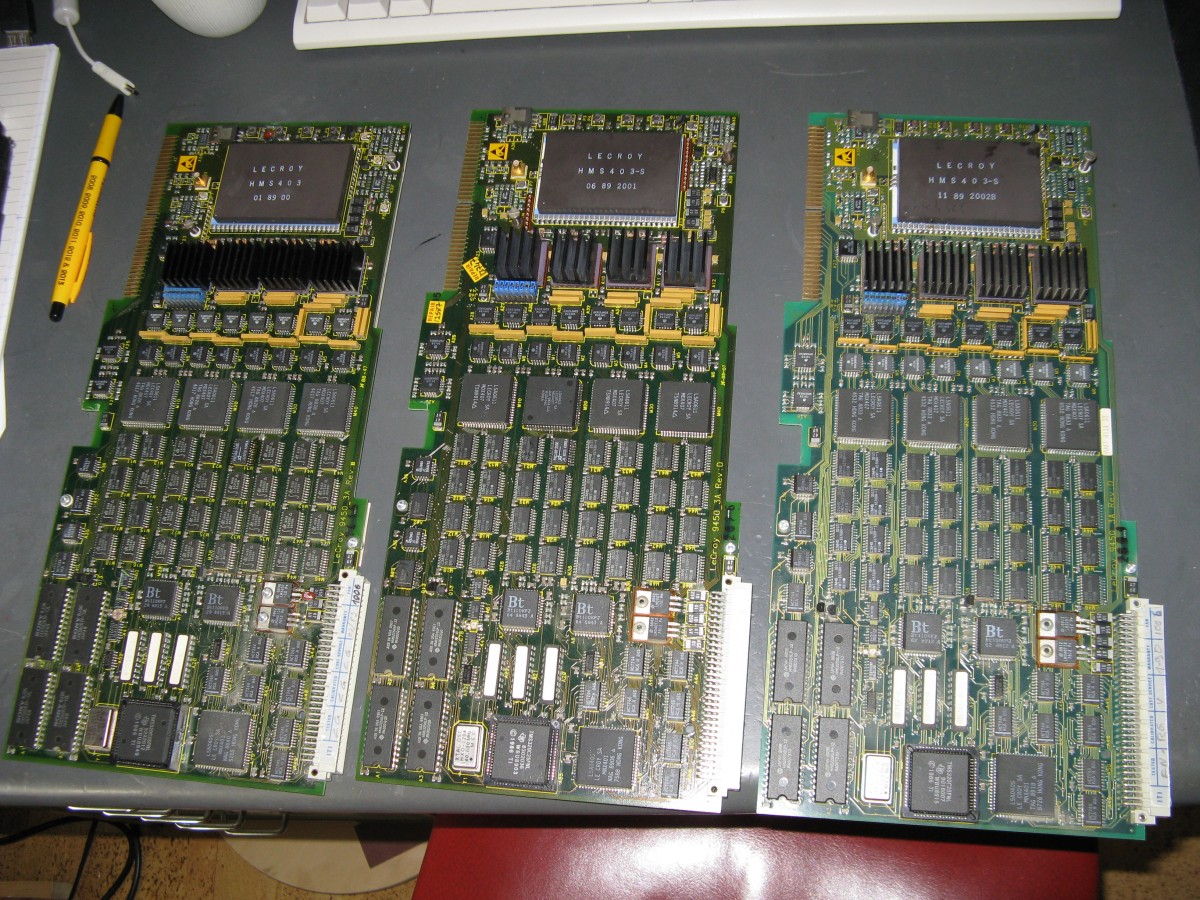 On some of the ADC boards, a 5V regulator is placed where others have just a cap. 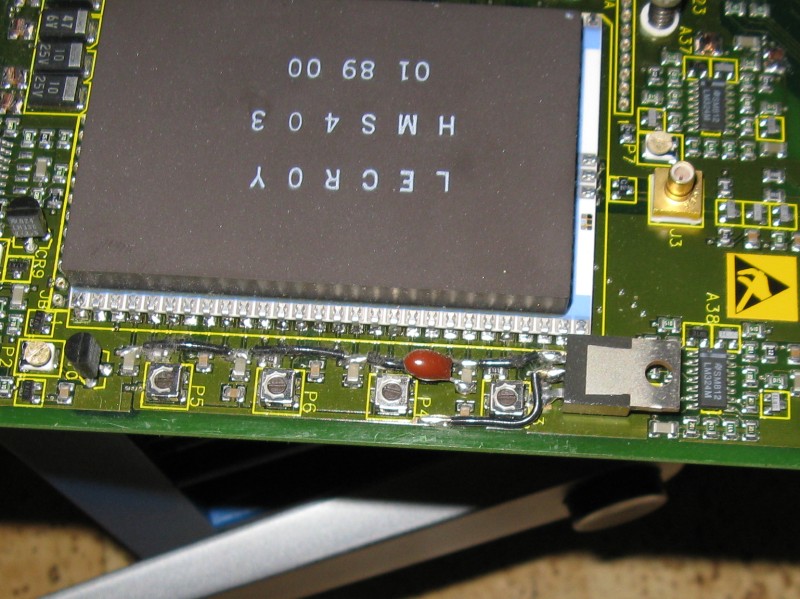 This is another original patch (-5V regulator), both on “9450_3A LMS broken”. This board has no LeCroy repair stickers (shown below), but those patches were there when I got the ‘scope so I assume they are original.

Bot these 2 regulators and the -12V and 12V ones have the correct output voltages. 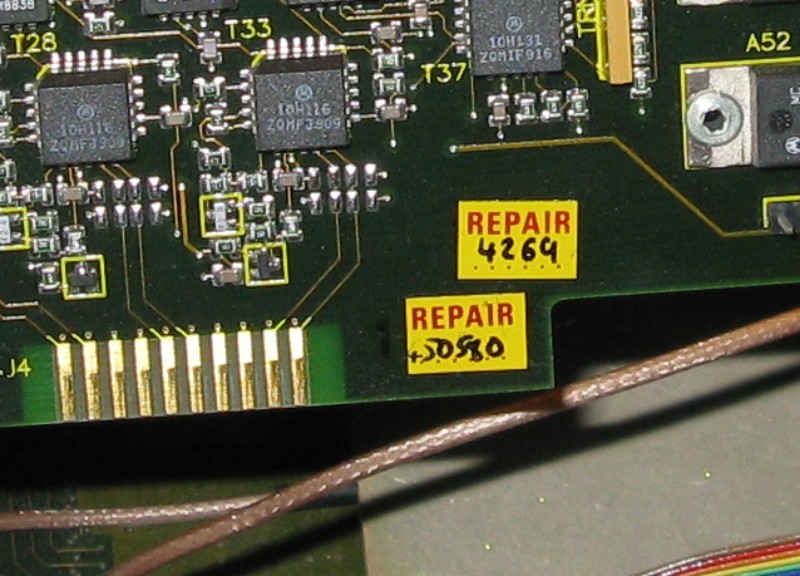 Lecroy Repair stickers on the timebase board. (This board is working fine) There are more of those stickers in the scope on other boards. 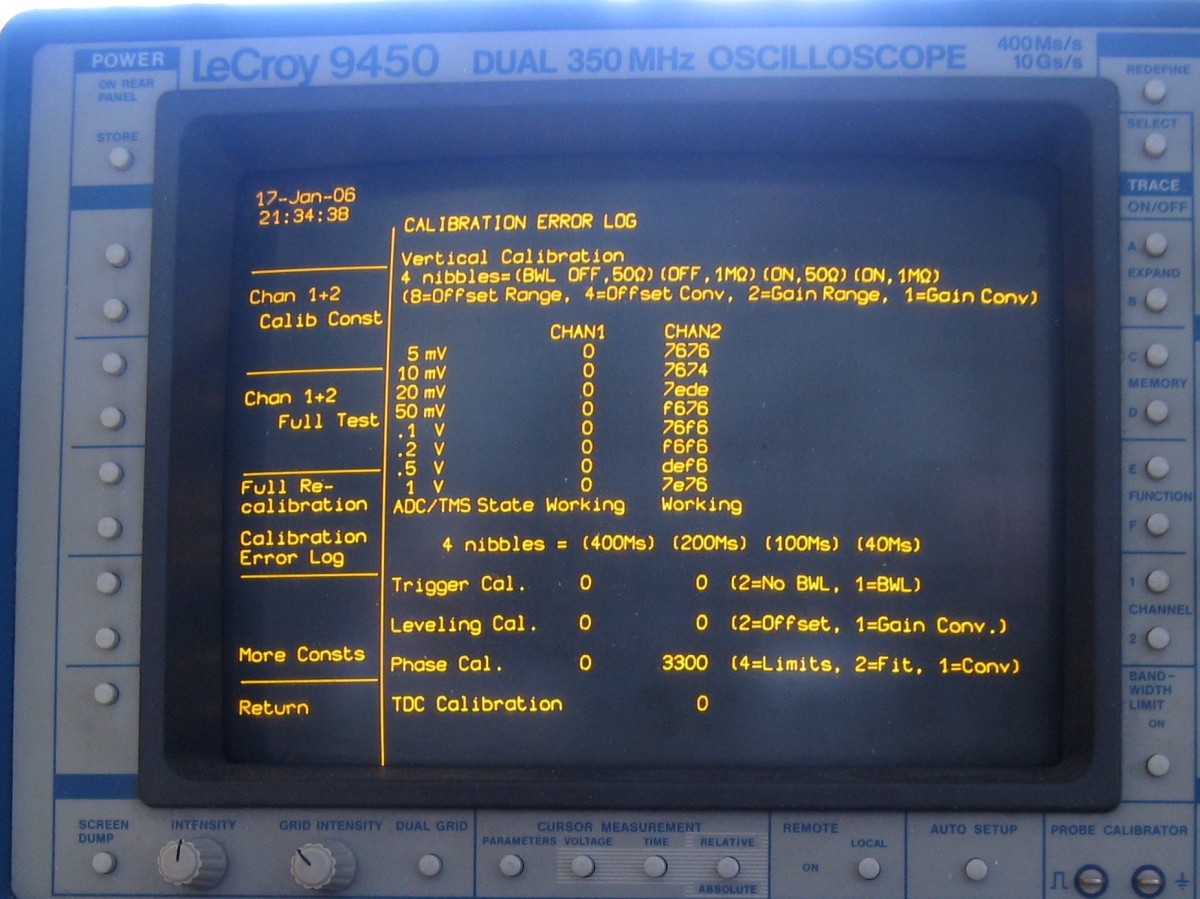 And the last one for today: The calibration error log. Chan2 has “9450_3A Claude” in this picture, but “9450_3A LMS broken” gives similar results. If I exchange the cards between the channels, ch1 gets the errors and ch2 is error-free. (The error-free channel has “9450_3A LMS working” in both cases).

Measured on HMS403, seems to be OK. Also none of the ADC’s have stuck bits (did not log what bit connected to what line of the LA, but with no input all are 0, as long as there is no selftest / calibration running.)

Please note if you connect a logic analyser to these circuits they are negative logic (“1” is – 5V, “0” = 0V). As the 0V is connected to chassis ground, and your LA’s ground might also be (through the powersuply’s both connected to earth ground), use caution!

The scope does not do a memory test on boot up. I carefully removed one of the RAM IC’s to test this, and the scope does still show “ADC/TMS state working”.

So there might be something wrong with the memory. Fortunately this is normal TTL logic again.

EDIT 8-Aug-2014:
On slower sample rates this scope only uses 1 of its 4 ADC’s (per channel). On slower sample rates, the problem stays, 1 out of 4 points on the display (Maybe 1 out of 4 samples?) is out of line. So it’s not 1 of the 4 adc’s that’s broken (because it only uses one at that sample rate), but something in the memory or further in the data pad. The memory is also divided in 4 parts/banks, so it could just be… But for now I’m going to work on other projects for a while.

Please comment if you have any questions or suggestions!

This was supposed to be an easy repair, and therefore not worth blogging about. But as it turns out, it might get interesting after all. (The ‘scope is not repaired yet)

The “Leidse Makerspace” owns a LeCroy 9450 350Mhz DSO. When they moved to their new location I temporarily got this oscilloscope. Not just for use or storage, but also to attempt to repair it. One of its channels was not working, sometimes it even wouldn’t display anything.

The display problem quickly turned out to be a loose connector. With this connector loose it would display nothing it al, or if it did work, it would sometimes glitch out like this:

While at other times it would display normally: 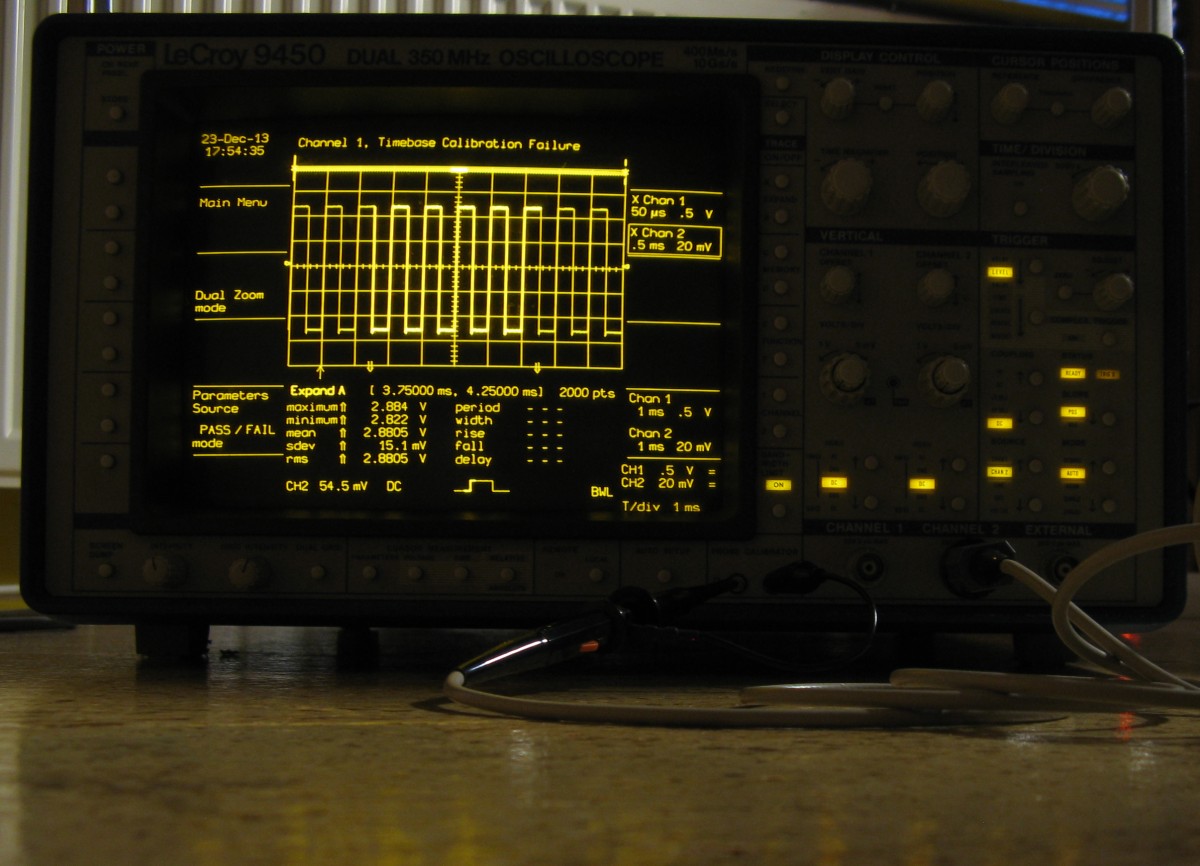 Probably just some transport damage, as after refitting this connector the problem has not been back. Now, on to the more interesting problem: channel 1 did not work: it did not respond to an input signal and it had a huge offset. After using the vertical position adjustment knob to bring it into view it would sometimes even oscillate on it’s own, showing needle-like pulses. The ‘scope also wouldn’t trigger on channel 1. Channel 2 functions fine, so it is still a usable 350Mhz DSO. However, 2 channels would be a lot nicer, and fault-finding is one of my hobbies. So… Time to remove the covers. 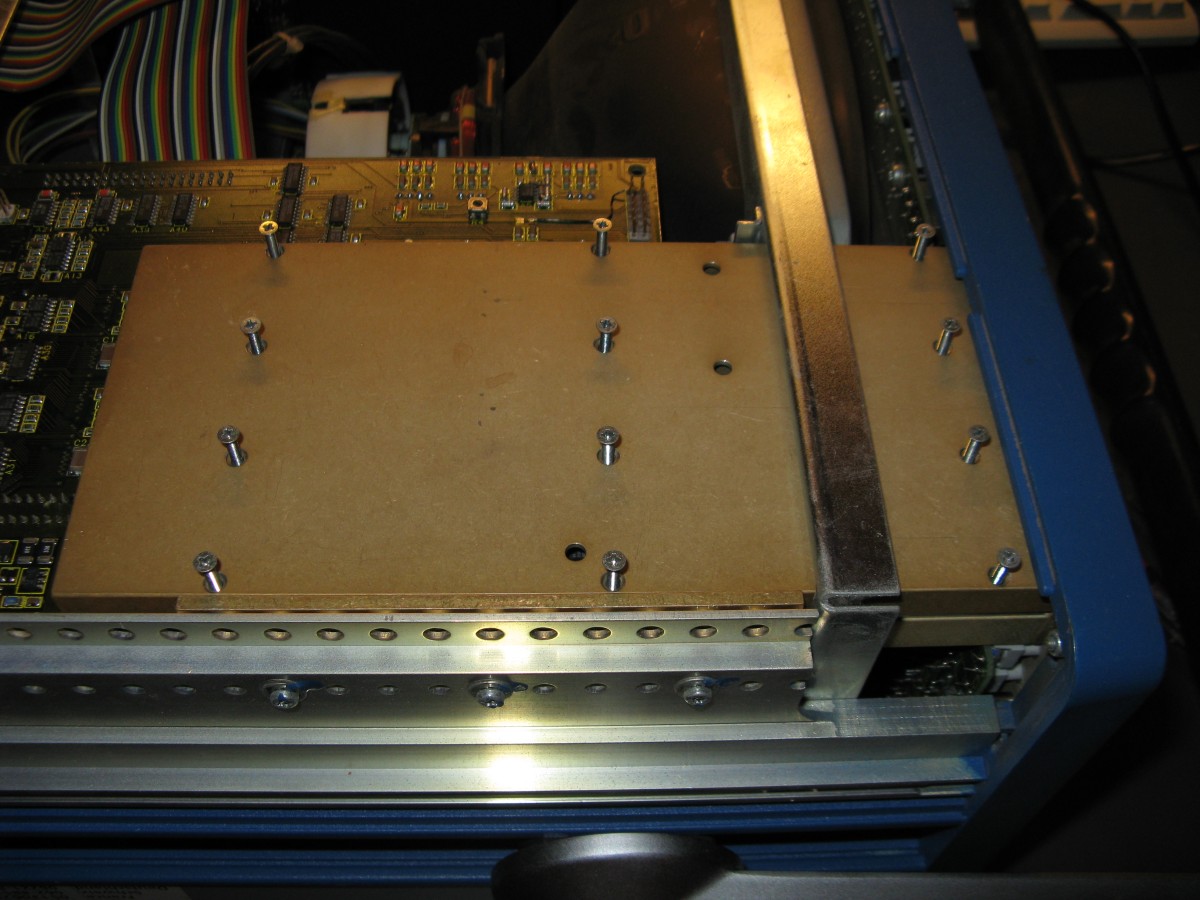 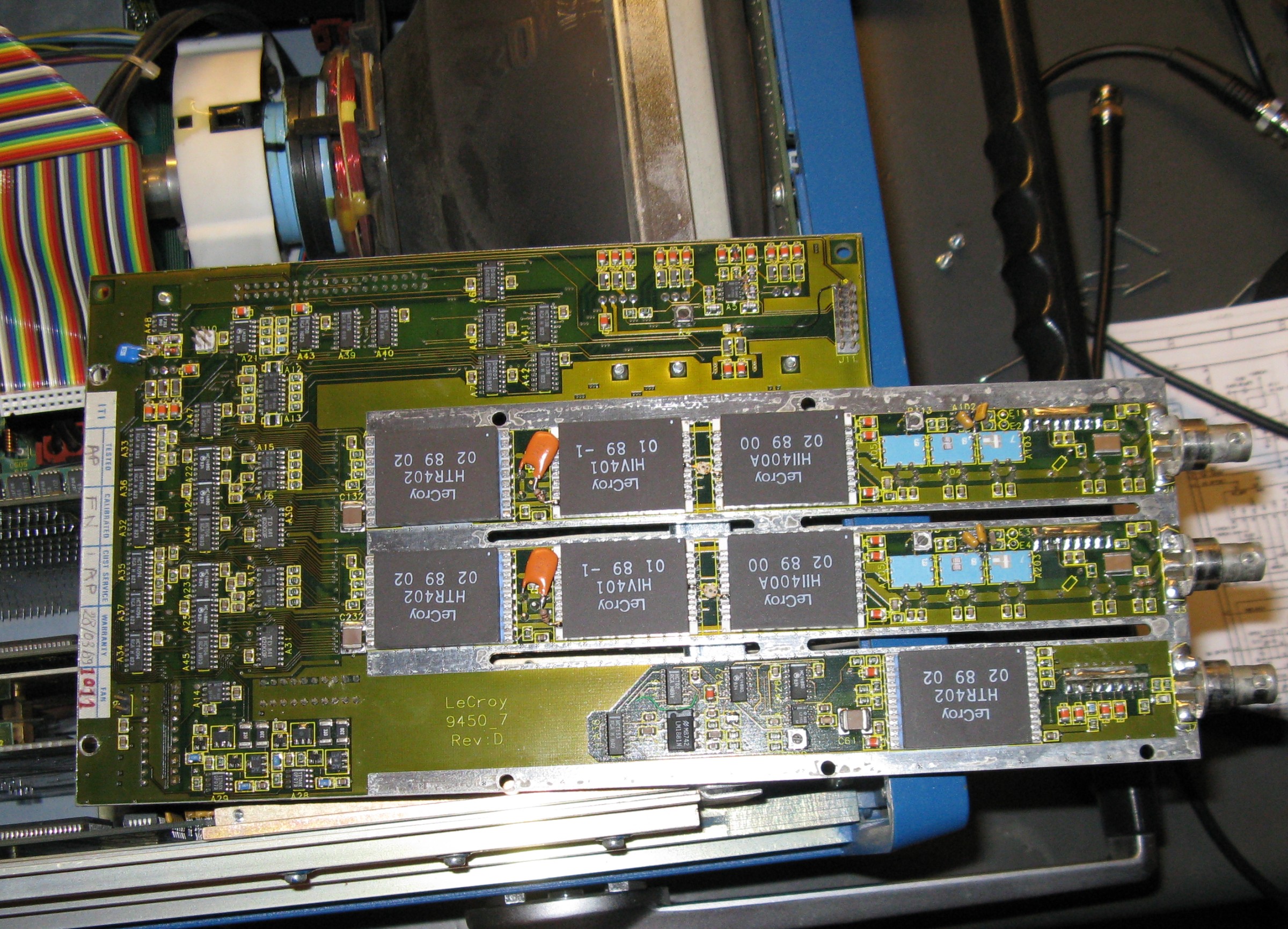 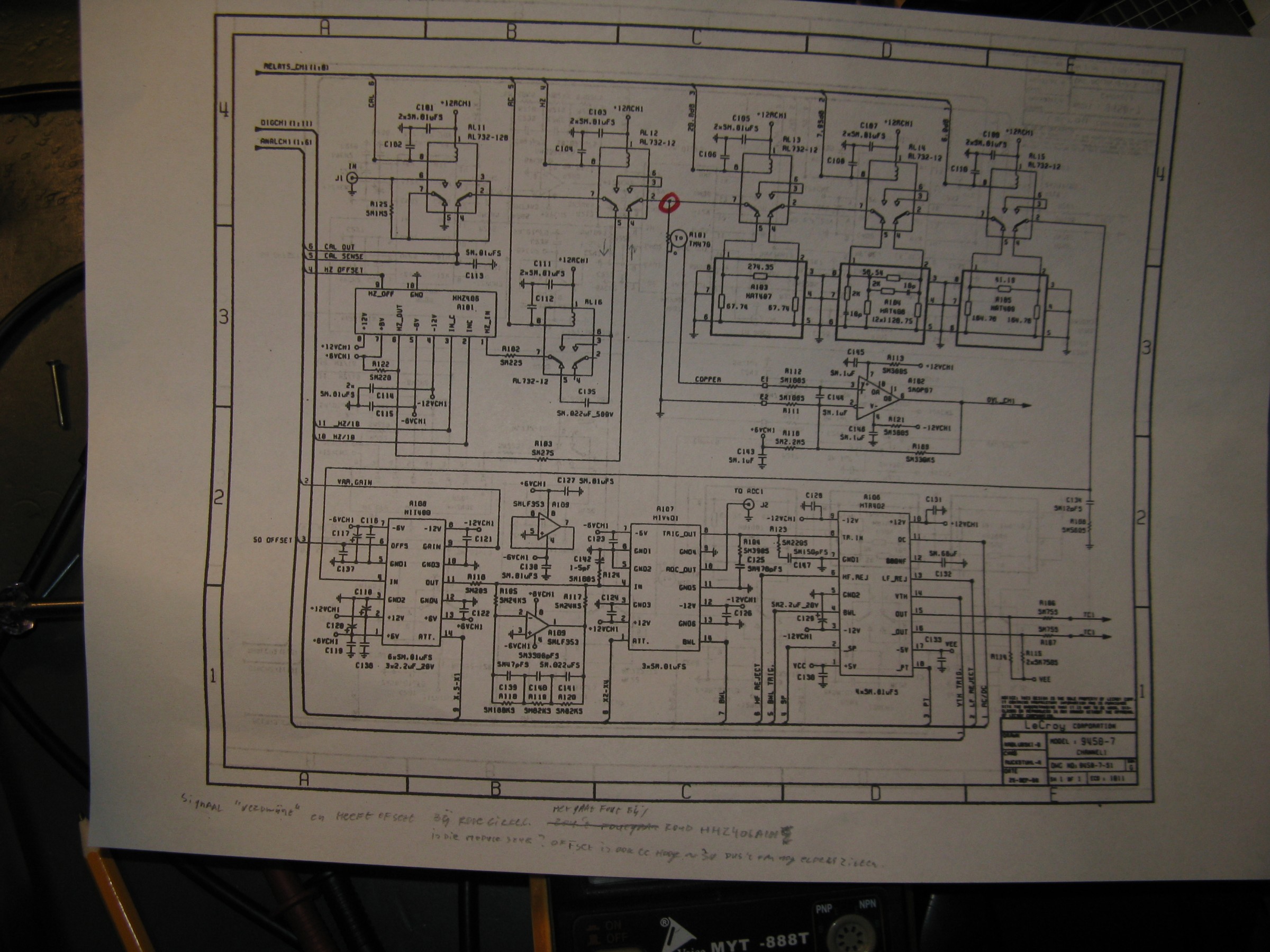 Close- up of the area of the board I’m looking at: 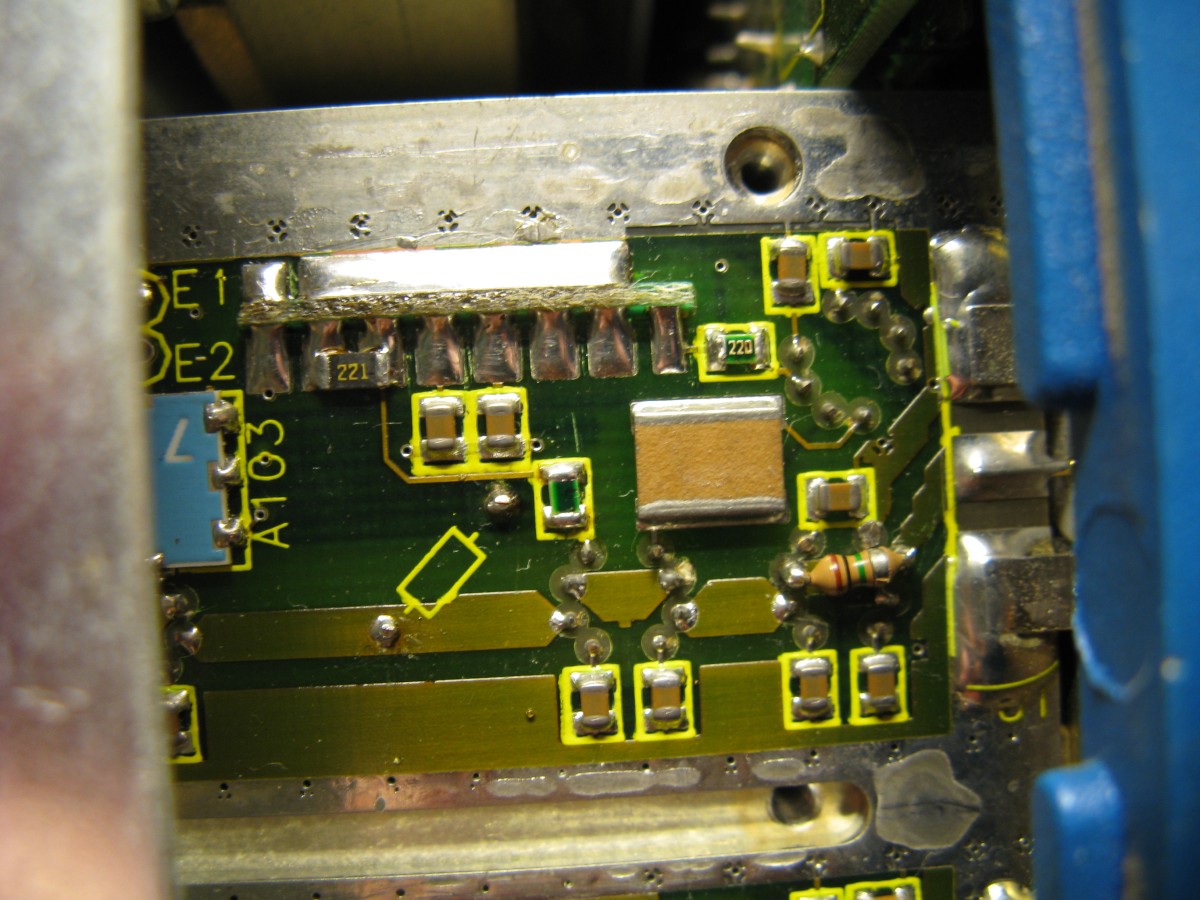 Somewhere here, the signal got lost. As you can see there is another module inserted through the pcb, this is the HHZ406. It turned out the signal entered this module (an amplifier), but nothing sensible got out. 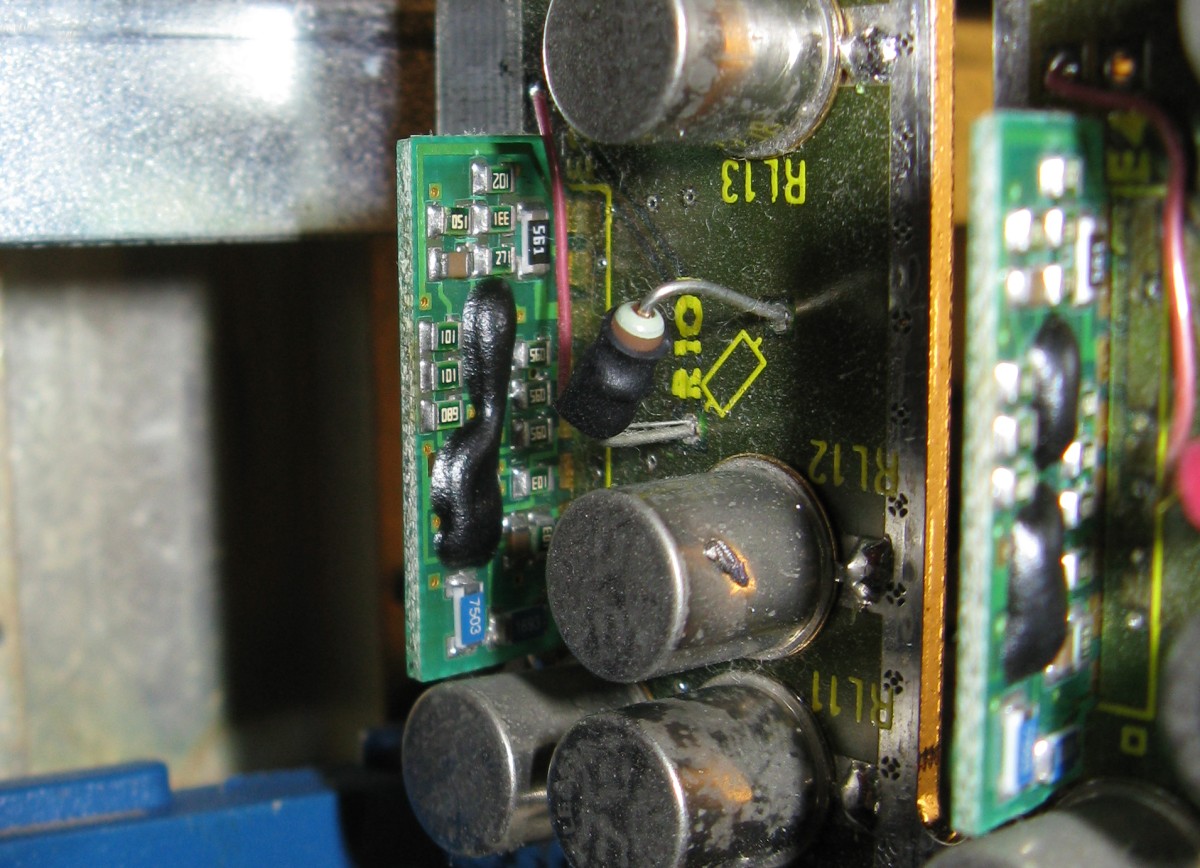 view from the other side of the board, also showing the relays. (Those metal cans) 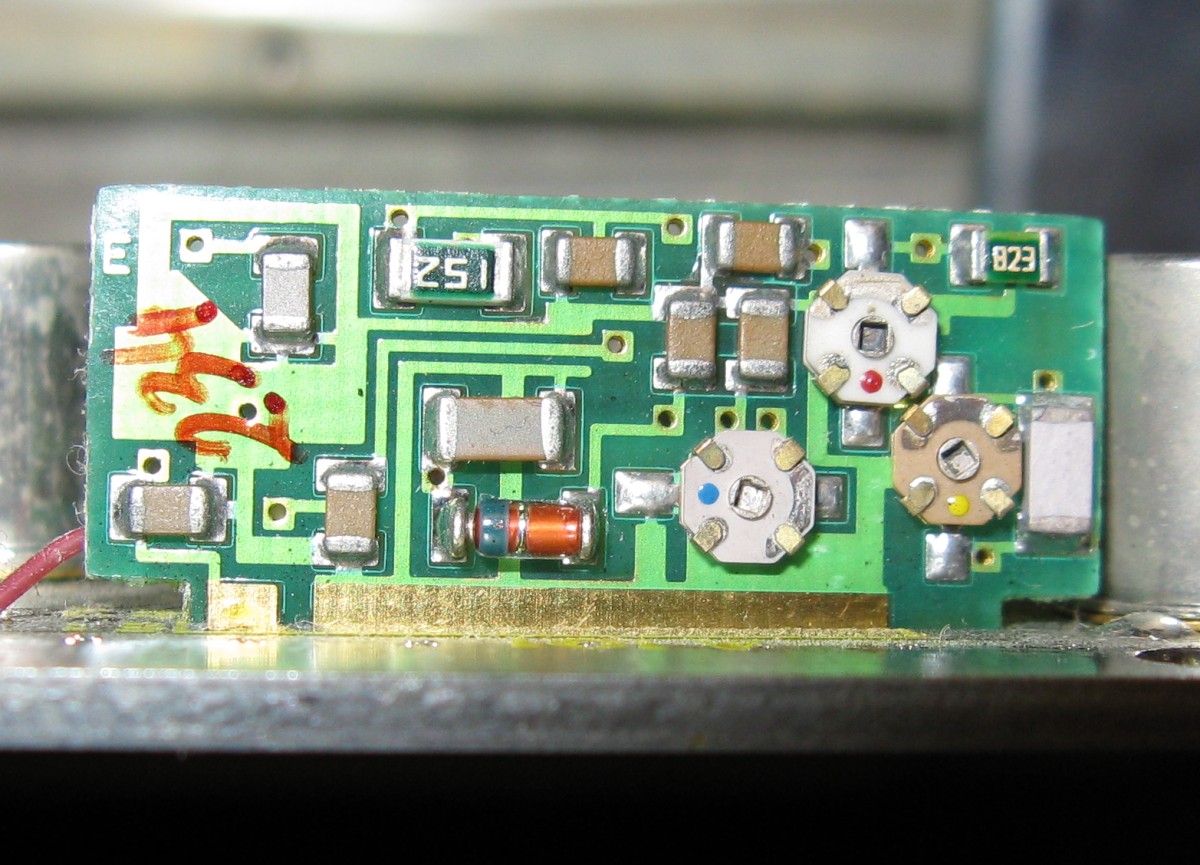 This module does not look like it can be repaired, nothing is obviously visibly broken, and those “black blobs” don’t look promising either, because these usually cover (custom) semiconductors directly bonded to the PCB.

It also looks like it cannot be bought anywhere. Too specific, too custom… (If you know where to get these, or work for LeCroy and have spares, or if you would like to reverse-engineer them, let me know.)

But this story does not end here. This scope has 3 HHZ406 modules. One for each channel, and one for external trigger.

So I swapped the modules for external trigger and channel 1. After this, the signal got to the output of the 9450_7 board. When using the same V/Div settings on ch1 and 2, and feeding them the same input signal, the signals here would be identical.

The story does not end here either, however. Channel 1 still does not work. It does respond to an input signal and the ‘scope does trigger on this channel now, but the signal is not displayed properly. It has needle-like pulses on it. These pulses move when changing V/Div settings on the ‘scope or input signal amplitude from the signal generator. (Video: http://www.youtube.com/watch?v=wFei5CZ6lqA)

There is another defect lurking somewhere in the 9450_3a ADC boards, because when I swap them, the problem moves to the other channel (Ch2). Measuring on these boards is harder because they are not easy to get to while the ‘scope is operating, unlike the analogue front-end (9450_7). 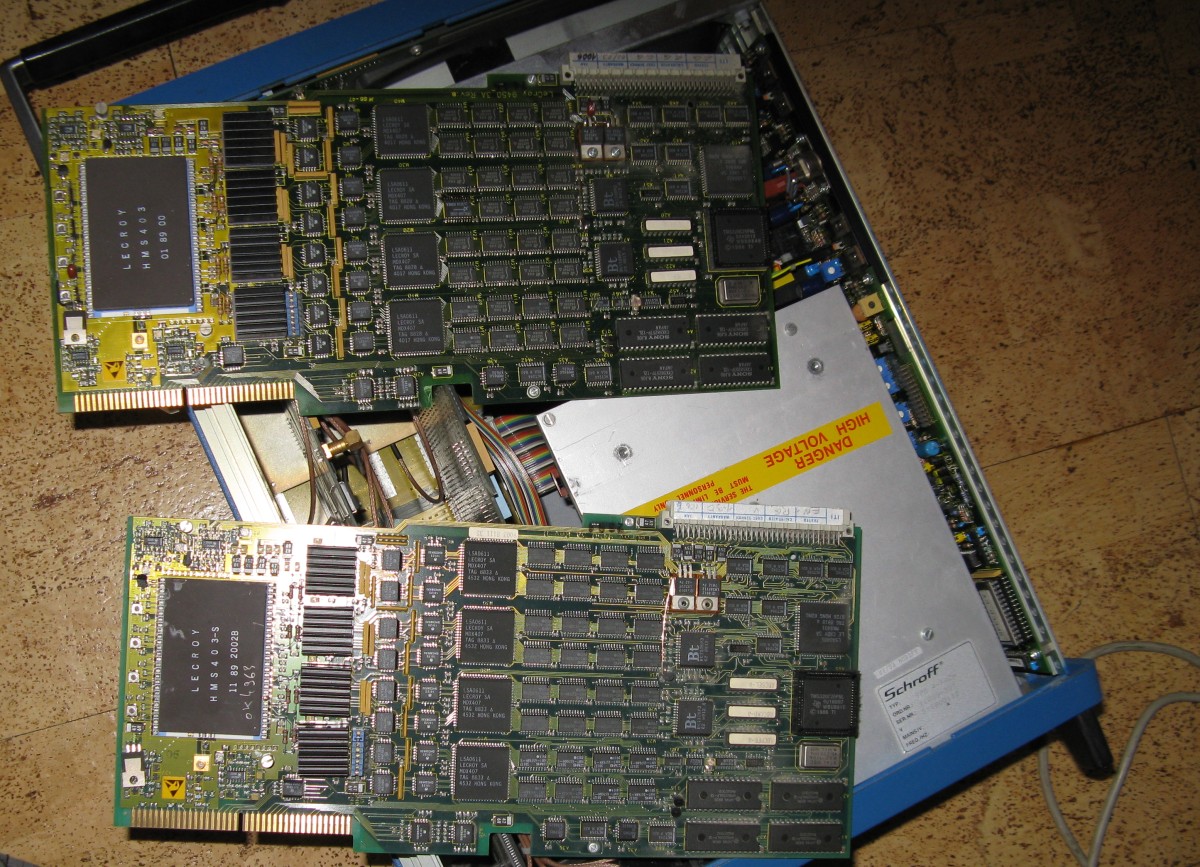